Our site may contain affiliate links. Read Advertiser Disclosure policy here. Some offers may have expired or are unavailable at this time. Terms Apply to Offers.

Recently a friend asked about Starwood hotels in San Francisco. Since I’ve stayed in two of the eleven Starwood hotels in San Francisco I thought it would be a good idea to share the reports here. This review is of the The Palace Hotel San Francisco. Also see this report of the W Hotel San Francisco.
Check In
Walking into this hotel I felt like I was stepping into an old luxury hotel. The check in was friendly and efficient. We were given the option of king room or suite upon check in, which we promptly accepted the latter. Walking past the staircase up the elevator we were struck by the width of the hotel’s hallways, newer hotel’s (W San Francisco) don’t seem to have nearly as much space in the halls. The hotel also has a very nice indoor pool with hot tub.
Room
The door opens to good size living room on the right with couch, desk, armoire, and windows on all around. There was a faint smell of smoke and since both my wife and I don’t smoke we called the front desk to inquire about other suites. There were no other suites available so we opted to open the windows and eventually the smell abated. The bedroom was large with an attached walk in bathroom. The bed was comfortable and had nice Lenin. I recall the bathroom amenities were Molton Brown (nice touch).
The Bedroom 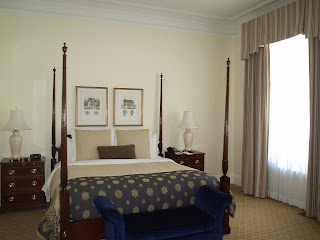 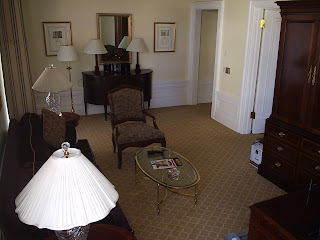 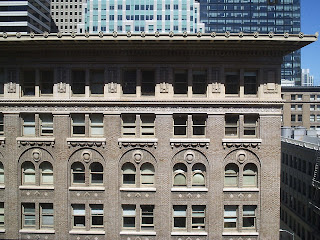 Location
In my opinion the location is still not as nice as the Westin St Francis, but is closer to Union Square than the W San Francisco.
We used Starwood points at 12,000 Starwood points per night for 1 night. While the cost was $0.00, this was also not a great value of points since the rooms are going for around $154 a night giving a point value of $.012 per point.
Editorial Note: Opinions, analyses, reviews or suggestions expressed on this site are those of the author’s alone, and have not been reviewed, approved or otherwise endorsed by any card issuer. For details on current offers visit the card issuer’s site.

Advertiser Disclosure: Points, Miles and Martinis may receive compensation from products that appear on this site. Points, Miles & Martinis does not include all offers available in the marketplace.