I just returned from 3 nights in Vegas at the Encore.

I met my wife in Atlanta and we flew out there together in First class. She was on an award ticket and I used a PMU to upgrade to first class. On the approach into Vegas we flew over Lake Mead. 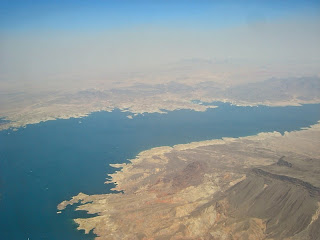 The return flight was easy until we got to Atlanta. Because of the tropical storms Atlanta was a mess. My wife and I’s flight were ok, but my cousins flight was cancelled and the other cousin’s flight was delayed significantly due to air traffic control.